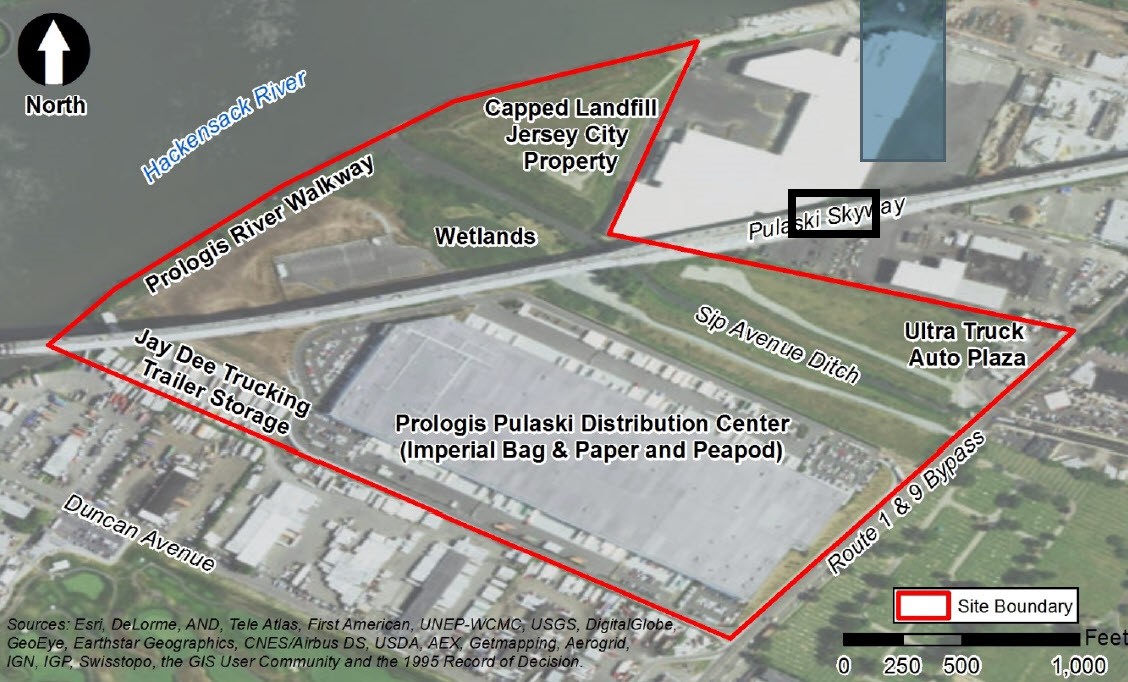 After reading the first two parts of my series for The Mob Museum, several friends—excellent researchers all—admonished me, claiming that I forgot that the PJP Landfill, aka “Brother Moscato’s Dump,” was an EPA Superfund site during the 1980s.  Thus, they argued, the fifteen-to-thirty chemical drums piled on top of Jimmy Hoffa—encased in a 55-gallon steel drum at the bottom of an eight-to-fifteen-foot hole—would have been collected and disposed as part of the overall EPA clean-up.

However, Frank Cappola, my key source for the location of Hoffa’s unmarked grave, stated in the sworn declaration I asked him to execute:  “[B]ecause of my father’s decision to bury Hoffa’s body off the PJP property, it is possible, even probable, that the grave was not affected by the EPA cleanup.  In other words, the burial site likely still exists and is intact.”

I then went to the EPA’s record of its multi-year operation at PJP and found the attached map, which shows the agency’s site boundary for the property, defined by the orange line.

Confirming what Cappola had stated under oath, I was relieved to see that the actual location of Hoffa’s remains under the Pulaski Skyway—which I have marked with a black box—was a few hundred feet outside the EPA’s eastern perimeter.

One other point:  Paul Cappola Sr. did not bury Hoffa’s body where Phillip “Brother” Moscato instructed him to bury it.

In his sworn declaration, Frank Cappola stated:  “Mr. Moscato had a burial location for Hoffa on the landfill site.  While he was talking to the people in the limousine, both my father and I witnessed him pointing in the direction of this location.

“My father was upset with Mr. Moscato for pointing to that area at the landfill, because the dump was constantly under police scrutiny, and Mr. Moscato’s gesture could have given away the location of Hoffa’s body.

“After Mr. Moscato left PJP, my father, who didn’t trust anybody, decided to dig a second hole with a company excavator and to place Hoffa at that location—unknown to Mr. Moscato.  My dad never told him.”

During our videotaped tour of PJP on September 29, 2019, Frank Cappola, who died on March 16, showed me the location where Moscato wanted Hoffa buried.  On the northern portion of the EPA map, that area is identified as, “Wetlands,” which is clearly inside the EPA perimeter.

Had Hoffa been buried there, the steel drum that contained his body would have been collected and disposed during the EPA Superfund clean-up.

In other words, Hoffa is probably still under the Pulaski Skyway—exactly where Cappola’s father laid him to rest 45 years ago this month.