Catalogue of Dan E. Moldea's published works
about the NFL and the Mafia 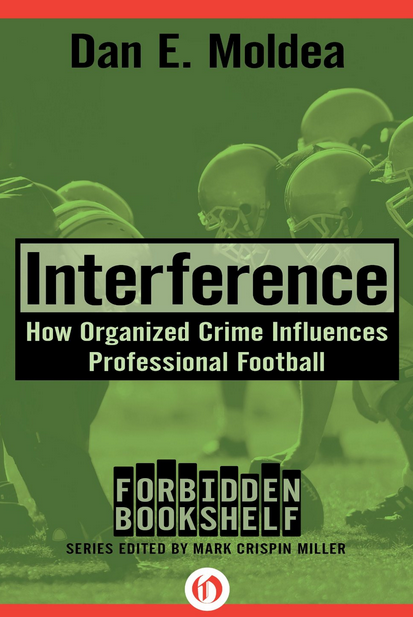 Dan Moldea's fourth book, Interference, was released by William Morrow & Company in August 1989 and went into three hardcover printings.  It chronicled the long-standing relationship between the National Football League and organized crime, which has resulted in no fewer than twenty-six past and present NFL team owners with documented ties to either the gambling community or the organized crime syndicate, evidence of no fewer than seventy fixed professional football games, and the suppression of no fewer than fifty legitimate law enforcement investigations of corruption within the NFL.  Moldea also charged that legalizing sports gambling will cause a proliferation of illegal bookmaking and organized crime activity; and that the illegal gambling economy has become an adjunct to the First Amendment because of the insistence by the sports media to print and broadcast the betting line and to hire oddsmakers and handicappers for the purpose of predicting the outcomes of games.

In recommending the book, the Gold Sheet, nationally-recognized as the "bible" for America's sports gamblers, wrote, "Interference shreds the sanctimonious NFL facade and exposes the league's hierarchy for what it really is--a bunch of wheeler-dealers who are in bed with the very associations they publicly denounce.  Fascinating reading."  The Las Vegas Review-Journal wrote, "Book stores here are having problems meeting the demand for copies of Dan E. Moldea's hot-selling hardback, Interference, and with good reason--the index reads a little bit like a 'Who's Who' of Las Vegas."  In a second review, the Review-Journal added, "The best book on the NFL's connection to the mob and the American gambling scene was Dan Moldea's groundbreaking Interference.  Moldea tore apart the league's papier-mache image and illustrated that, without gamblers, it would have remained on the sandlots." The Boston Herald stated, "Stand by for some fascinating assertions made by Dan Moldea, who this time. . . colorfully describes how the underworld reaches into NFL locker rooms and boardrooms for inside information.  He describes the 'outlaw line' as part of the game's very fabric."  The San Francisco Chronicle said, "What does come through in Interference is that mob contacts within the NFL appear to be as subtle and profitable as insider trading on Wall Street. . . . Learning about this 'infiltration' by Mafia players makes Moldea's book quite a page-turner."  The Rocky Mountain News wrote, "This book, which details the influence of gambling and the link to organized crime in the NFL, is credible for one particular reason:  It indicts the owners of the league more than the players and exposes the NFL for the gambling machine that it is."  The Los Angeles Times said, "Interference is like a hard-nosed fullback, . . . packed with names, dates and places, hitting the holes until the defense--one's incredulity--gives way.  The weight of evidence is overwhelming."  Keith Olbermann, anchorman for ESPN Sports, stated:  "Moldea has written perhaps the most important sports book in the history of the language."

The reaction to Interference by the sports media, which Moldea openly criticized, was so fierce that the March/April 1990 issue of the Columbia Journalism Review published an article, detailing Moldea's battles with Gerald Eskenazi, who wrote a critical review of the book for the New York Times Book Review.  "In the prologue to Interference," CJR reported, "Moldea had predicted that the National Football League would 'send its front line of defense, the loyal sportswriters, to attack the messenger.' Eskenazi, he says, was beholden to the football establishment."

In the review, Eskenazi, a NFL beat reporter for the Times, clearly misrepresented what Moldea wrote and didn't write in the book.  He claimed that Moldea alleged certain facts he never did; and he charged that Moldea omitted specific facts that were clearly in the book.

In a second look at the controversy over the review, the Columbia Journalism Review insisted, "Moldea has reason to be upset . . . [A]fter comparing what the book says with what the review says it says, one might conclude that Eskenazi was some distance from Pulitzer territory."

In the Nation, columnist John Leonard, a former editor of the New York Times Book Review, wrote, "I've read Interference, and Gerald Eskenazi's review of it, and if we are to deplore sloppy journalism we must admit that sloppy reviewing is one of its drearier subdivisions."

Moldea had requested a retraction of the Times's review, then a correction, and finally the publication of his letter to the editor refuting the review.  The Times denied all of these requests.

Carlin Romano, the president of the National Book Critics Circle (NBCC), told the Washington Post, "None of the big media outfits seem to take seriously that it may be Moldea who's on the right side of freedom of expression here.  His argument--that he and authors like him have little chance to respond to book reviews in major publications--is well taken."

On August 23, 1990, Moldea filed a $10 million libel suit against the New York Times in the U.S. District Court in Washington D.C.  On January 31, 1992, a federal judge dismissed the suit; Moldea's attorneys immediately appealed.

On February 18, 1994, the U.S. Court of Appeals for the D.C. Circuit overturned the lower court decision in a strongly-worded opinion; thus, reinstating the case.  The Legal Times stated, "[T]he Moldea ruling will most likely prompt book reviewers to do more factual homework, a habit the First Amendment cherishes.  And to the extent the decision chills reviews that maliciously and factually mislead the reader--the proof required for damage recovery when the book author is a public figure--it chills what ought to be chilled."

Nevertheless, the appellate court's decision touched off a firestorm of apocalyptic editorials and cataclysmic protest from the general media.  The Wall Street Journal reported, "The media are up in arms over the panel's decision, pointing to a dissenting judge's assertion that it could 'open up the entire arena of artistic criticism to mass defamation suits.'"  Another article in the Nation replied, "Contributing to the pile-on tactics, both big corporate media and putative defenders of free expression strafed Moldea from the start, with little attempt to understand Moldea's side of the case."

Then, on May 3, 1994, just eleven weeks after the controversial opinion and in an unprecedented act, the same three-judge panel--citing no new evidence or legal precedents--reversed itself, upholding the lower court dismissal.  "I am amazed," Professor Rodney Smolla, a top First Amendment expert told the Los Angeles Times.  'I've never heard of one like that in my life.  I've heard of circuit conflicts but not an interpersonality split."  Summarizing the court's decision in what the appellate judges called Moldea II, the Wall Street Journal noted, "Even if a reviewer is trying to damage an author's reputation, there may be nothing the courts can do about it, 'at least not without unacceptably interfering with free speech,' [a judge] asserted."

In its own report on Moldea II, the New York Times quoted Moldea as saying, "These judges spent over six months reviewing the case history as well as my book. . . . On that basis, they ruled in our favor.  Since then, the only new contributions have been the avalanche of misleading articles and editorials overreacting to this decision.  I think it's legitimate to question what impact all of that had on this very bizarre reversal."

On August 1, 1994, Moldea's attorneys filed a Petition for Writ of Certiorari with the United States Supreme Court.  On October 3, in another unprecedented moment in judicial history, the High Court refused to review any of the nearly 1,700 newly-petitioned cases pending before it, including Moldea.  The New York Times described it as "the day the Supreme Court of the United States said 'no.'"

"Now that the Supreme Court has turned down Moldea v. New York Times, managing with a single 'Denied!' to leave the law on criticism and libel a mess and the Court's cozy relations with the Times uninjured," wrote Carlin Romano in his November 1994 president's letter to the NBCC membership, "we can all return to being wild and (safely) woolly-headed book critics."

For a detailed analysis of this case, see Moldea v. New York Times:  The Untold Story

*  Dan E. Moldea, Confessions of a Guerrilla Writer:  Adventures in the Jungles of Crime, Politics, and Journalism, "Part Five, "The NFL and the Mafia, and Part Six, "Moldea v. New York Times" (Moldea.com, 2013)