The murder of Senator Robert Kennedy

The Killing of Robert F. Kennedy:
An Investigation of Motive, Means, and Opportunity  (The Fourth Edition)

In June 1987, Dan E. Moldea published a cover story for Regardie's magazine about the June 1968 murder of Senator Robert Kennedy, hoping to help force open the official case file, which had been sealed by the Los Angeles Police Department for nearly twenty years.  At first look, the LAPD's probe of the Kennedy murder appeared to provide extremely persuasive evidence of convicted assassin Sirhan Sirhan's guilt.  But, simultaneously, a close study of the controversies in the case appeared to provide equally persuasive evidence that a second gun may have been fired at the crime scene.  This evidence consisted of: 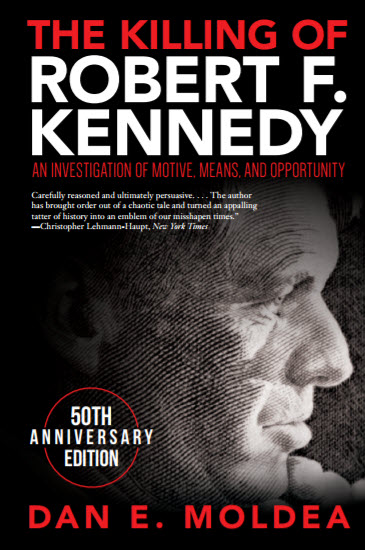 * A flawless coroner's autopsy and the LAPD's own muzzle distance tests, which demonstrated that Kennedy's wounds had been caused by a weapon fired from point-blank range--six inches or less.  Yet, not a single eyewitness at the crime scene ever saw Sirhan's gun get that close.

* An official FBI report and accompanying photographs taken at the crime scene, which indicated that four bullet holes had been discovered in Sirhan's line of fire.  Sirhan only had an eight-shot revolver, and all eight bullets had been accounted for:  three shots hit Kennedy; one bullet was removed from each of the other five victims, all of whom survived.

* A court-appointed firearms panel that refired Sirhan's gun seven years after the murder.  Although the experts could match the three intact victim bullets with each other, they were unable to match any of these victim bullets with the 1975 test shots.

* The presence of a security guard--who admitted to extreme right-wing views, worked for George Wallace, and hated the Kennedy family--standing directly behind Senator Kennedy with a gun in his hand and powder burns on his face.  In the Regardie's article, Moldea published his exclusive interview with the guard, who clearly had motive, means, and opportunity.

While the article was still on newsstands, the City of Los Angeles finally announced that it would release the 50,000-document investigative file on the Kennedy case.  However, after the files were made public, it became clear that many documents and photographs were missing or had been mysteriously destroyed; thus, suspicions about the LAPD's investigation and ultimate conclusions continued.

After being criticized by LAPD homicide detectives for relying on the statements of eyewitnesses who "are not trained or experienced or qualified to make judgments" about what they saw at the crime scene, Moldea began locating and interviewing over a hundred law enforcement personnel who were "trained, experienced, and qualified" and directly involved in the original, official investigation.

To his surprise, he received nearly all of his best evidence of a possible second gunman from many of these officials--who identified what appeared to have been extra bullets at the crime scene, essentially corroborating the earlier official FBI report and its accompanying photographs.

On the basis of this new evidence, Moldea wrote a second story for the Washington Post on May 13, 1990, "RFK's Murder: A Second Gun?"  In this article, Moldea concluded: "[I]t would be a mistake to rush to quick or simplistic judgments concerning the origin of additional assassination gunshots.  The importance and complexity of this matter demand that it be examined impartially be a reconstituted official investigation."  Also, three days later, this article served as the foundation for a half-hour segment on NBC's Unsolved Mysteries.

However, it was not until he received the backing of a major publisher, W. W. Norton & Company, that he could do what was necessary to resolve his own questions about this case.

Released by Norton in June 1995, Moldea's The Killing of Robert F. Kennedy:An Investigation of Motive, Means, and Opportunity chronicled the official case history, the subsequent controversies, and, finally, the author's own investigation, which included the police interviews, a polygraph test with the security guard, and a series of exclusive prison interviews with Sirhan Sirhan.  After explaining the reasons for the conflicting evidence in the case in the book's final chapter, Moldea concluded, "Sirhan Bishara Sirhan consciously and knowingly murdered Senator Robert Kennedy, and he acted alone."

In a major news story, Newsweek stated, "If there had been a conspiracy to assassinate Robert F. Kennedy, as many people believe, Dan Moldea probably would have found it. . . . Moldea shows that simple (and sometimes hilarious) human error explain these suspicious coincidences. . . . If this reporting doesn't seal the case, Moldea's chilling prison interviews with Sirhan do."  The Boston Globe wrote, "Resisting the temptation to trade in today's hot market for conspiracy, Moldea crafted instead a nonfiction version of a Columbo movie, in which the murderer is known from the opening scene and the grip of the story comes from the twists and turns of his investigation:  a howdunit more than whodunit. . . . That Moldea could carry off such a trick is a testament to his skill as a writer and investigator."  The St. Louis Post-Dispatch said, "The book is a triumph in several ways. The first triumph is stylistic. . . . The second triumph is ethical. . . . The third triumph is substantive. . . . Readers who want to reward responsible investigative journalism ought to buy this book."  The San Francisco Chronicle added, "Moldea's book is an act of courage. . . . Many writers would have simply abandoned the project when they discovered that their fundamental views about a subject they had researched for years were wrong.  That Moldea did not is greatly to his credit.  His book will serve future historians well."  The San Francisco Examiner commented, "[Moldea's] research is impeccable . . . the legwork in first-rate." Booklist said, "Detailed and definitive, Moldea's investigation might close the book on the tragedy."

And the New York Times, in a major daily review by Christopher Lehmann-Haupt on May 25, 1995, described the book as, "Carefully reasoned, ultimately persuasive, dramatic. . . . The author meticulously dissects how the various disputes arose and how critics were drawn into the orbit of the case. . . . The cleverness of [Moldea's] strategy in the book lies in his playing so effectively the part of devil's advocate. . . . His book should be read, not so much for the irrefutability of its conclusions as for the way the author has brought order out of a chaotic tale and turned an appalling tatter of history into an emblem of our misshapen times."

A second review in the New York Times Book Review described the book as "a persuasive reexamination of the assassination . . . amply supported by prodigious research," adding, "Beyond presenting what is likely to be the best understanding of what actually happened on June 5, 1968 . . . [t]his book presents a remarkable turnaround for a writer who had partly staked his reputation on the existence of a second shooter.  But because of the honesty and logic with which he approaches his study, Mr. Moldea's journalistic instincts have never looked sharper. . . . [T]his is the best written of his books, finished in a clear and easy style."

In Evan Thomas's 2000 bestseller, Robert Kennedy:  His Life, the author wrote:  "There are various conspiracy theories about RFK's assassination.  I was persuaded by Dan Moldea's The Killing of Robert F. Kennedy that they are bogus."

Video:  DEM on the RFK case

Dan Moldea, author of the 1995 book, The Killing of Robert F. Kennedy, makes his case that Sirhan Sirhan committed the murder and acted alone on KNBC New Conference with legendary television anchorman Jess Marlow in Los Angeles, June 2, 1995.  (There are blackouts between segments where commercials appeared during the original broadcast.  The entire recording is 26 minutes, 30 seconds.)


* Dan Moldea on his role in the RFK murder investigation (From his memoir, Confessions of a Guerrilla Writer).

* Read Chapter One of Moldea's The Killing of Robert F. Kennedy:  An Investigation of Motive, Means, and Opportunity (W. W. Norton, 1995).

* Moldea on the polygraph test he arranged for Thane Eugene Cesar.

* For an excerpt of Moldea's interviews with Sirhan Sirhan, see Confessions of a Guerrilla Writer, Part Seven, Chapter 8.

* Read Moldea's response to a January 17, 2000, documentary about the RFK case on The History Channel, specifically dealing with the issue of alleged extra bullets at the crime scene.

* How do Sirhan's apologists explain the convicted assassin's "Hey Punk" letter to his attorney, which Moldea revealed in his book?


DEM's blogging on the RFK case

May 27, 2018:  Washington Post critic lies about his presence at the RFK crime scene in his review of my book

May 28, 2018:  RFK Jr. proclaims the innocence of the man who murdered his father

June 1, 2018:  The Boston Globe allows me to refute the very dangerous story in the Washington Post, as well as RFK Jr's proclamation of Sirhan's innocence

June 5, 2018:  My June 1995 story in the Washington Post--before the newspaper fell in love with Sirhan Sirhan

June 6, 2018:  When will the New York Times clean up the mess that the Washington Post is making on the RFK murder case?

January 22, 2019:  Still waiting for the New York Times to clean up the Washington Post's mess on RFK

September 4, 2018:  The finale of The RFK Tapes:  A debate between Bill Klaber and Dan Moldea

DEM's responses to the legitimate students of the murder, the screwballs, and the liars

* Moldea replies to Jerry Policoff's lies about Greg Stone and his suicide.

* Moldea's reply to conspiracy-theorist Shane O'Sullivan and the "paranoid's paradise" he has created with his shameless work on the RFK case.

* The disgraceful and shameless pro-conspiracy series in the Washington Post: