Catalogue of Dan E. Moldea's published works
about Ronald Reagan and his associates 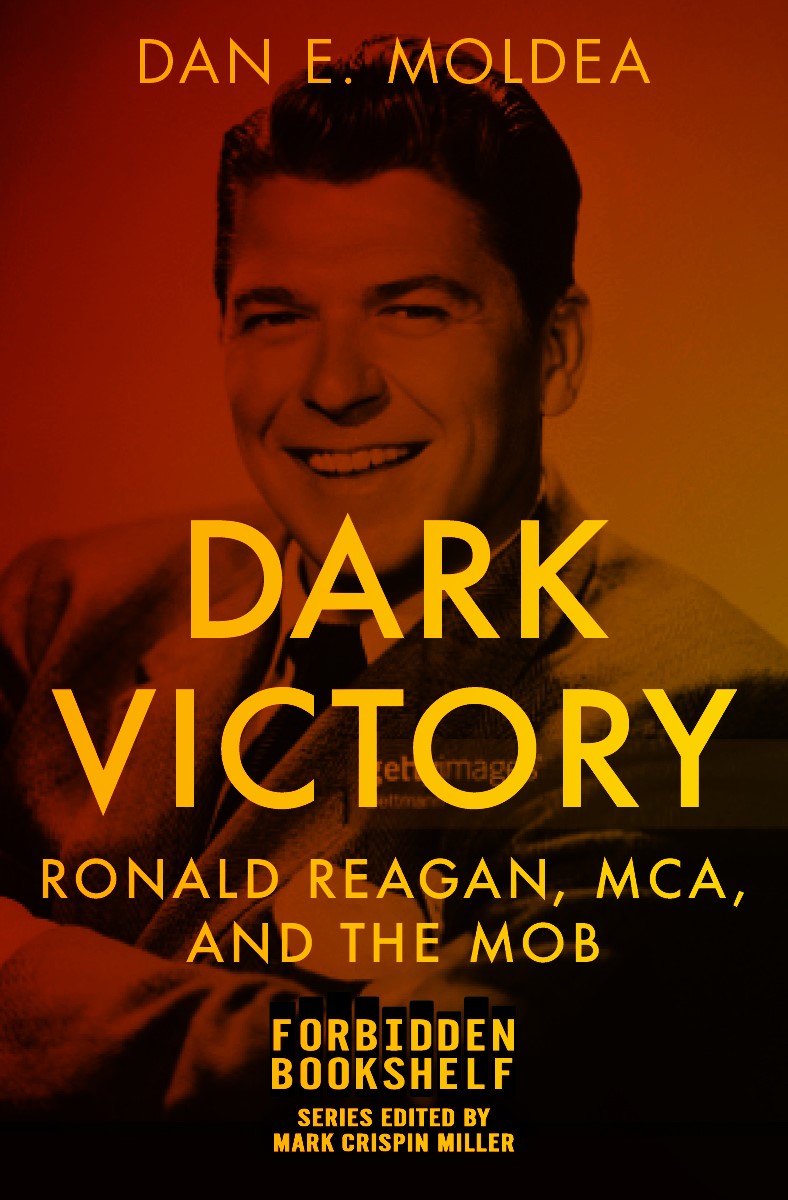 Moldea's third book, Dark Victory, was published by Viking Press in August 1986.  It was on the Los Angeles Times best-seller list for three months.  The principal characters in the book were President Ronald Reagan; Lew Wasserman, the chairman of the Music Corporation of America (MCA), the entertainment conglomerate (which has has been renamed Universal); and Sidney Korshak, the link between the legitimate business world and organized crime.  The centerpiece of the book, which detailed the Mafia's involvement in Hollywood, was the first-time publication of Ronald Reagan's secret testimony before a federal grand jury in 1962.  Moldea alleged that Reagan, via his talent agency, MCA, had maintained ties to major organized crime figures throughout his career, charging that the Reagan Administration's wars on crime and drugs were nothing more than charades and public relations campaigns.

Remarkably, even though MCA was the key to Reagan's rise from actor to U.S. President, no previous book or biography about Reagan had even addressed this subject.  Moldea's book was the first.

Dark Victory was released in trade paperback by Penguin Books in May 1987.  Included in this edition was a postscript dovetailing Moldea's charges with details of the Reagan Administration's Iran/Contra scandal that were revealed after the hardback was published.  Specifically, Moldea predicted that the scandal "is going to wind up as a series of multimillion dollar drug deals involving right-wing ideologues who sold drugs to raise money for the Contras as part of their eleemosynary activities.  But more prominently, there were those who were more mercenary, selling drugs for profit, using the Contras as a cover for their illicit operations."

The Los Angeles Times wrote, "Dark Victory is indeed a victory for author Moldea.  He has, through sheer tenacity, amassed an avalanche of ominous and unnerving facts.  It's a book about power, ego and the American way.  Moldea has shown us what we don't want to see."  Library Journal said, "Using previously classified documents, crime reporter Moldea spins several tales in this extraordinary book, principally the rise of the Music Corporation of America (MCA) from a fledgling band-booking company in 1924 to Hollywood's most powerful TV, film, and recording conglomerate, and the intertwined journey of MCA client Reagan from mediocre actor to U.S. President."  The San Francisco Chronicle stated that, "The whole saga reaches a critical mass of sleaze. . . . [Moldea] has woven enough threads to call into serious question the conduct of the highest office in America." American Film said, "Actually, Moldea tells three separate but tangential stories: organized crime's infiltration of legitimate business and labor, the meteoric rise of the entertainment conglomerate MCA, and the jet-propelled ascension of a somewhat passe movie actor to the president of the United States. These stories have been abundantly researched and are set forth in exquisite detail."  The Dallas Morning News wrote, "Moldea's exhaustive expose of MCA is one of the most explosive books of the decade."

And, in Gus Russo's 2006 book, Supermob:  How Sidney Korshak and His Criminal Associates Became America's Hidden Power Brokers, the author wrote:  "Dark Victory . . . was the most courageous, and well-researched, indictment of a sitting president and his power base in history."