The following story appeared in the Washington Post on March 15, 1987. 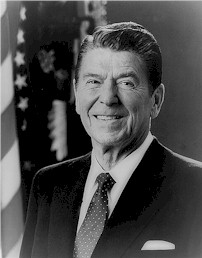 When President Reagan says that he has forgotten important details about the Iran-contra affair, there is ample precedent for his inability to recall key events. On Feb. 5, 1962 -- the day before his 51st birthday -- he appeared as a witness before a federal grand jury in Los Angeles.

"I don't want to appear as though I am trying deliberately to be vague," Reagan said, responding to questions about some of the most important events of his term as president of the Screen Actors Guild. "But, as I say, I would like you to realize in my history of holding an office with the guild, my memory is like a kaleidoscope of meetings, that I am sure if I sat down with someone and started in, I could then recall the details . . . ."

The grand jury was investigating possible criminal misconduct as a part of an anti-trust probe and never charged Reagan with any crimes. But the testimony gives a fascinating look at Ronald Reagan under an investigator's sharp questioning.

Reagan had been the president of the guild in 1952, when it was against contractual agreements with the guild for talent agencies to produce television shows. According to guild documents, he supported an exclusive waiver for MCA, the talent agency which represented him. The waiver was granted in 1952 and renewed in 1954.

Guild by-laws prohibited agencies from employing their own clients in such productions. After that restriction was waived by a unanimous vote of the SAG board, Reagan benefited financially and professionally. MCA arranged appearances in Las Vegas and a job as host of "The General Electric Theater," MCA's flagship program. This relationship led to investigation by the FBI and the Justice Department's antitrust division. Reagan's personal agent, who had negotiated a seven-year, million-dollar contract with Warner Brothers for actor Reagan in 1942, was Lew Wasserman, who in 1962 was president of MCA. Today Wasserman is chairman of MCA's board.

Federal antitrust division attorney John Fricano questioned Reagan about the relationship between MCA and the Screen Actors Guild. Indirectly addressing the subject, Fricano asked, "Which company, whether a member of the Alliance (of Television Film Producers) or not, was the first to capitulate with respect to repayment for reruns?"

Reagan replied, "There you have me. I wouldn't know where we cracked that and if you tell me I'll have to take your word for it."

"Well, you were president of Screen Actors Guild in 1952, were you not?"

"This was a very important matter," Fricano continued, "which Screen Actors Guild was taking up and it was the most important point of the guild?"

Fricano unsuccessfully attempted to jog Reagan's memory and then broached the subject of the MCA waiver. Reagan asked when the action was taken. Fricano replied, "July 1952."

Reagan said, "Well, maybe the fact that I married in March of 1952 and went on a honeymoon had something to do with my being a little bit hazy."

"I'm glad you raised that point. If we might digress, who is your wife?"

"Do you recall any other unusual or momentous events in 1952 with respect to SAG's relations with one or more TV film production companies?"

"Well, now what kind of events?"

"Oh, we have granted -- I didn't know when it exactly started, we granted an extended waiver to MCA to be engaged in production as we had done with other people . . . ."

When pressed by Fricano, Reagan could not cite any other company that had ever received such a blanket waiver from SAG.

Fricano then asked, "Can you tell this grand jury why Screen Actors Guild gave to MCA a blanket or unlimited waiver?"

"Well," Reagan explained, "my own reasoning and one of the reasons perhaps why this doesn't loom so importantly to me is I personally never saw any particular harm in it. I was one who subscribed to the belief, and those were times of great distress in the picture business, I was for anyone that could give employment. I saw no harm in this happening . . . ."

"Do you recall whether or not you participated in the negotiations held by MCA and SAG with respect to the blanket waiver in July of 1952?"

"No, I think I have already told you I don't recall that. I don't recall. There were times when I wasn't involved on a committee. Whether that is one of them or not I wouldn't recall. I must tell you that I always told [the executive secretary] in the guild that I realized I felt a little self-conscious sometimes about that, lest there might ever be a misunderstanding because of the fact that I had been so long with MCA, and sometimes I kind of ran for cover and was very happy to duck a committee duty in these matters."

"I don't honesty recall. You know something? You keep saying [1954] in the summer. I think maybe one of the reasons I don't recall was because I feel that in the summer [of 1954] I was up in Glacier park making a cowboy picture . . . so it's very possible there were some things going on that I would not participate in but I have no recollection of this particularly."

"I would like to know, sir, if you can tell the grand jury why in June 1954 the blanket waiver to MCA was extended and the negotiations which SAG held with MCA were private negotiations, whereas 24 days later, negotiations were held for other talent agencies who had also requested waivers and the waivers of those agencies were limited waivers?"

"Were you aware of the fact?"

"I will say one thing. I don't know what you are getting at with the question and I am certainly in no position to infer that I want to tell you what to do or not. I can only say this. I have tried to make plain why my memory could be so hazy on a great many things . . . [But] in all my years with the Screen Actors Guild I have never known of or participated in anything, nor has the guild, that ever in any way was based on anything but what we honestly believed was for the best interests of the actor . . . ."

Becoming impatient, Fricano soon became even firmer in his questioning. "Were you aware, sir, that in 1954 negotiations did take place between MCA and Screen Actors Guild with respect to the waiver which had been entered in 1952?"

"No," Reagan angrily said. "It's like saying what I was doing on October 25, the night of the murder."

"I mean you pick a year that is going back eight years and you say, 'Where were you?' I have tried to picture what hassle the guild was in at that time."

"Take your time and think about it. I don't expect an immediate answer."

"Do you recall now, sir, whether or not you were aware in 1954 of the renegotiations of the letter of agreement of 1952 between Screen Actors Guild and MCA?"

"All I can say, usually these negotiations and things of that kind seemed to fall in the even years. So I would have to say probably 1954, yes, this would be. To tell you of my own memory, in my mind I can tell you whether we did nor not, I can't. Serving with Screen Actors Guild long years of negotiating on meetings for a long time, just retaining things that happened, the lawyers' reports and then so forth, and then you find yourself in a battle like we had with the communists or with the strikes."

"Excuse me, sir, I don't mean to interrupt you, but we would like to focus on this one question. Is your answer -- I don't quite understand it quite frankly -- but is it your answer at this time you do not remember whether or not you were aware of the 1954 negotiations between Screen Actors Guild and MCA?"

"Do you recall ever having an discussion with Mr. Wasserman concerning waivers?"

"My question is still, sir, do you recall every having any discussion or discussions, be they at a cocktail party or anywhere, where you discussed waivers?"

Six months later, on July 13, 1962, MCA was charged with violations of federal antitrust laws. Also charged as a co-conspirator was the Screen Actors Guild. Reagan was not charged. Two months later, the charges against MCA and the guild and the pending investigations were dismissed as part of an out-of-court settlement between the federal government and MCA. As a proviso of the final settlement, the record of the case was sealed.