Below is an undated letter from Sirhan Sirhan, the convicted assassin of Senator Robert Kennedy, to his attorney, Grant Cooper, regarding Robert Blair Kaiser, aka "R.B.K.," an investigator on Sirhan's defense team who studied for the priesthood and wrote the important 1970 book, "R.F.K. Must Die!":  A history of the Robert Kennedy assassination and its aftermath (Dutton).  The letter reads:

Tell your friend Robert Kaiser to keep mouthing  off about me like he has been doing on radio and television.  If he gets his brains splattered he will have asked for it like Bobby Kennedy did.  Kennedy didn't scare me; don't think that you or Kaiser will:  neither of you is beyond my reach.  [A]nd if you don't believe me--just tell your ex-monk to show up on the news media again--I dare him.

I published the contents of this letter in my 1995 book, The Killing of Robert F. Kennedy:  An Investigation of Motive, Means, and Opportunity.

Sirhan's own words in this document appear to contradict the theory promoted by Sirhan's apologists that he was programmed to kill by persons unknown and then programmed to forget about it. 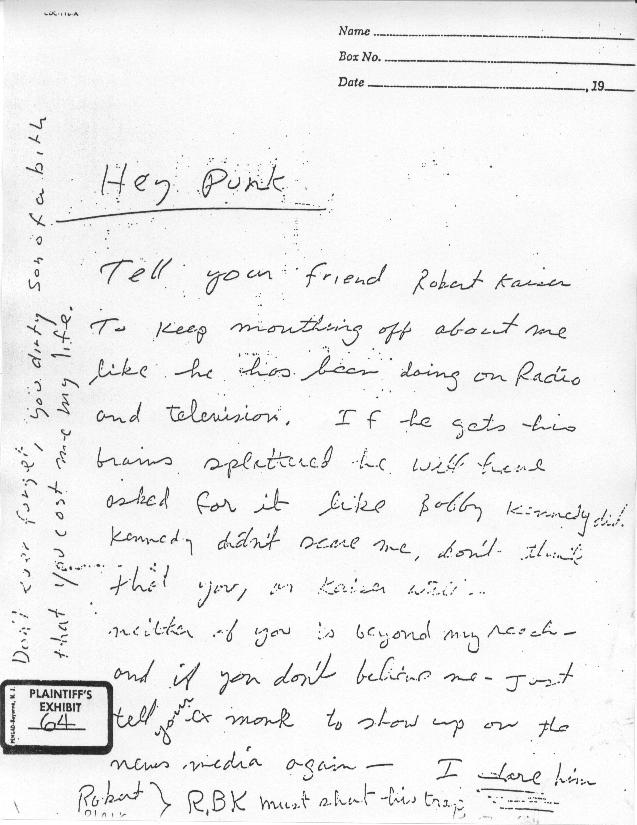