A service of Moldea.Com, from mid-2000 to mid-2004,
which provided links to public-information sources for
those investigating members of the Bush family
and their business - political interests. 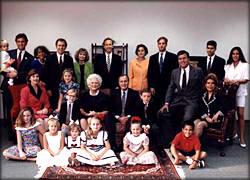 For those who want to stay on top of the media's coverage of Campaign 2004,
the Columbia Journalism Review offers The Campaign Desk.

Some say that this ABC News site contains the best day-to-day political coverage.
You decide.

Do you need some sane, level-headed commentary?
Click onto David Corn's "Capital Games" in The Nation.

Who is Ruben Bolling?  See why so many people are noticing his fabulous work.

For ground-breaking investigative journalism,
see the Center for Public Integrity's Public i.

Tired of the usual talk-show blather?  Get the real lowdown from
"Pundit Pap" at Gene Gaudette's American Politics Journal.

Bushology Interactive's People of the Year

2004 People of the Year:  Bill Bennett, Rush Limbaugh, and Bill O'Reilly,
constant reminders that right-wing media stars are generally hypocrites with conflicting standards
of private behavior for public figures--one for themselves and another for everyone else.
They always seem to wind up overplaying their winning hands.

2003 Person of the Year:  Paul Krugman (New York Times),
a fearless economist/journalist whose columns about the dark side of the Bush Administration
warn of its shameless cronyism and its role as a genuine threat to world peace.
(See:  A compendium of Krugman's works.)

2002 Person of the Year:  Senator Paul Wellstone (D-Minnesota),
a man of courage, conviction, and peace--who spoke out for the poor and the powerless
and stood up against corporate corruption, tax breaks for the rich, and right-wing hypocrisy.

2001 Person of the Year:  Senator Jim Jeffords (I-Vermont),
who broke up the right wing's complete control of all three branches of the federal government.

2000 Person of the Year:  Senator-elect Hillary Clinton (D-New York),
for her toughness, courage, and grace under fire, as well as her historic victory.

Also the home of Mobology Interactive.