"I didn't want a writer of sensational Hollywood works.  I really need a hard-core investigative journalist here.  I thought, this is the man to do it.  He's a good and decent man, and very upfront and straightforward."  (Washington Post, August 8, 2007)

From the Acknowledgements page of attorney Montgomery Blair Sibley's book, Why Just Her:

"The term 'gentleman' has all but disappeared from the landscape of the District of Columbia.  As such, my thanks are mandatory to Dan Moldea, who refused to let that sobriquet expire by always behaving towards Jeane and me as a gentleman."  (page 1) 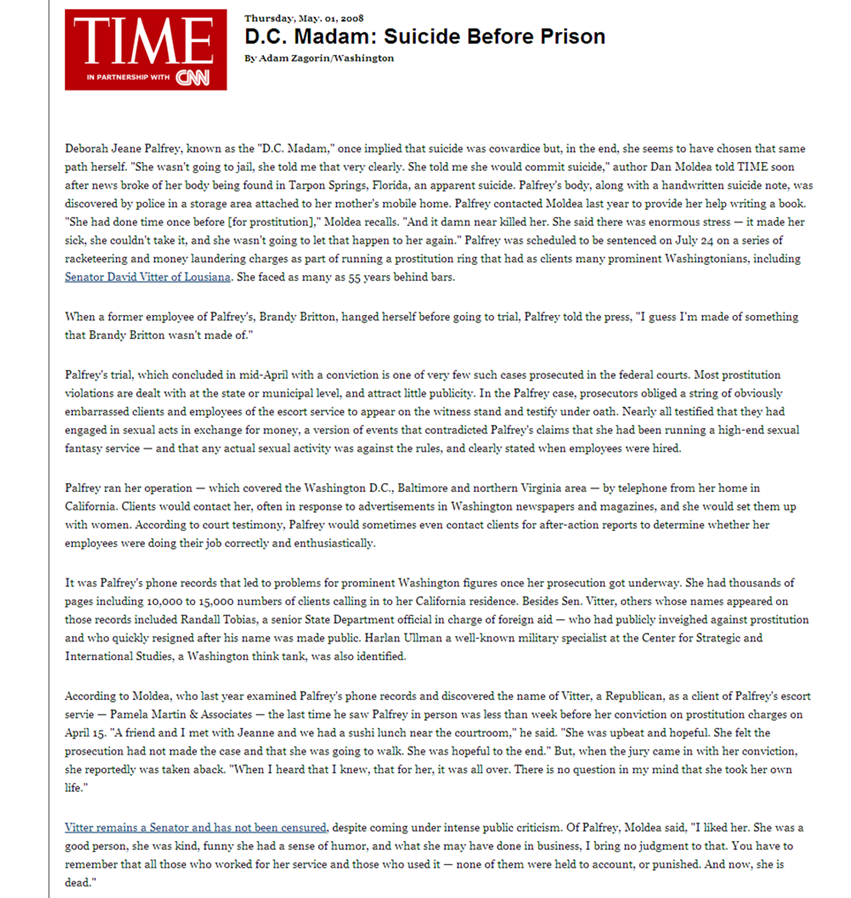 Moldea on how Time broke the above story so quickly after news of Jeane's death had been announced on May 1: 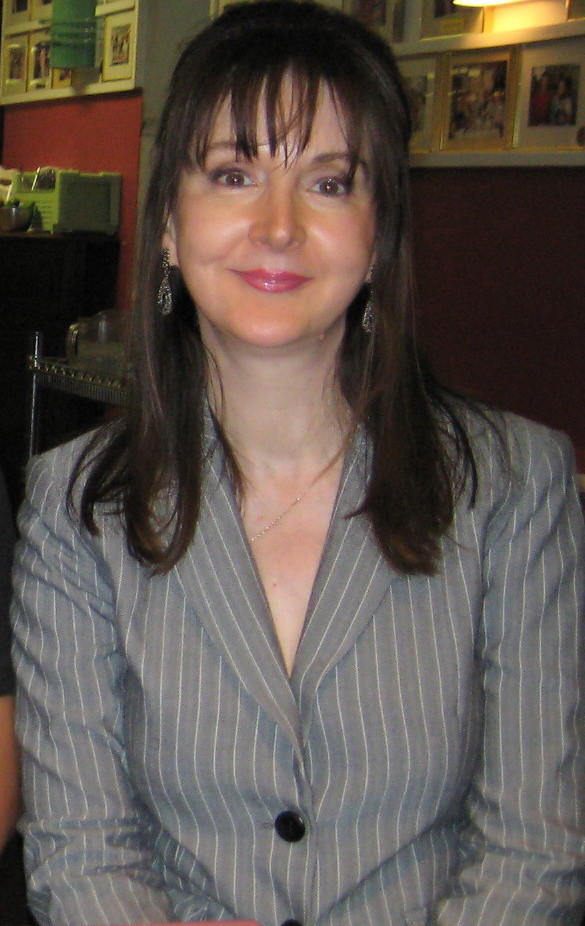 Wild speculation by people who suspect that Jeane Palfrey was murdered has surrounded the circumstances of the Time article above, revolving around how the magazine received and broke this story so quickly after Jeane's lifeless body had been found at her mother's home in Tarpon Springs, Florida.

To understand how this happened, just Google my name and that of Time reporter, Adam Zagorin, the author of the above story, and you will see that I leaked Senator David Vitter's name to Adam last summer after I had discovered Vitter's name in Jeane's phone records.  Adam was the Time reporter who called the senator's office for comment.  (Also see: "How David Vitter Got Nabbed in Madam Scandal" in the Washington Post.)

On May 1, Adam called me at my home immediately after he heard of Jeane's death.  Inasmuch as I knew and trusted Adam--and had arranged his interview with Jeane last July--I gave him my story about her death, which included Jeane's statements to me that she would opt for suicide in lieu of returning to prison.

Because he had an exclusive, he rushed the story onto Time's website.  The article's headline, "D.C. Madam: Suicide Before Prison," was later vindicated by the contents of Jeane's two suicide notes, which were released by the police on May 5.

The "Jeane-was-murdered crowd,*" primarily led by radio talk-show host Alex Jones (who received some inexplicable support from Kimberly Guilfoyle and Geraldo Rivera of Fox News, as well as CNN's Nancy Grace), cynically tried to exploit Jeane's sad demise, placing her death at the center of a series of screwball conspiracy theories.  In an effort to diminish my claim that Jeane intended to commit suicide in the wake of her conviction, Jones's reporters and supporters revived:

-- a long-settled dispute--revolving around a "fabricated quote," as falsely alleged by Sirhan Sirhan's principal stooge--that sprang up during my series of interviews with Sirhan in 1993-1994, which also includes a signed statement by the source who gave me the quote;

-- the right-wing attacks over the conclusion in my 1998 book that Vincent Foster had commited suicide; and

-- my controversial role during the Clinton-impeachment drama in 1998-1999.

At no time did Jones's stooges call and ask me for comment prior to the publication of what can only be described as a series of lies and fabrications.  Please click the above links for my fully-documented versions of these events.

Mercifully, the unfair attacks against me subsided considerably after the release of Jeane's suicide notes--even though many people still wrongly believe that Jeane was murdered, and their ridiculous charges against me still remain online.

(*) Those who qualify for the "Jeane-was-murdered crowd" are the blogs and websites which either repeated, all or in part, what can only be considered as the reckless and malicious reporting of Alex Jones's stooges, or those who allowed their sites to be used as vehicles for the expression of additional defamatory statements about me.

In effect, they have either suggested that I knowingly participated in a murder conspiracy against Jeane, or that I actively served as an operative in a plot to cover up the facts of a friend's tragic death.

Those known irresponsible blogs and websites, which appear to believe that they may defame at will, are:

The Edge of Nowhere

One site, The Next Level, has since added links to this webpage on its thread about Jeane's death--which I appreciated.

I request written notifications from any other sites that also make this webpage--my side of this story--available to their readers.

The shameless Alex Jones uses Jeane Palfrey's tragic death to promote yet another one of his moronic conspiracy theories, as well his money-making books, films, and "infogear": 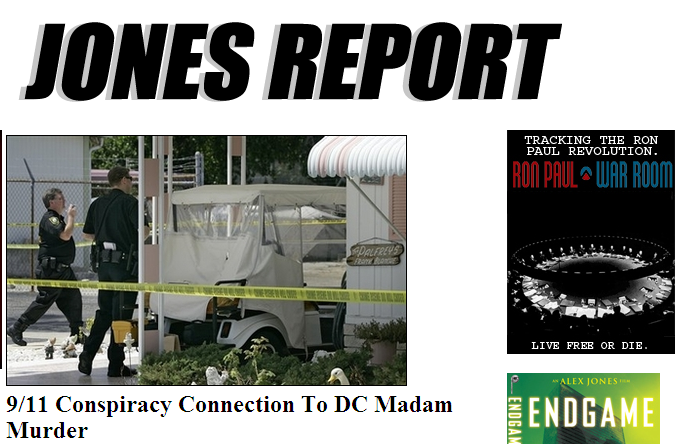 Excerpt from Jeane's April 25th suicide note to her mother, revealed on May 5, 2008, and confirming that she opted for suicide in lieu of returning to prison:

"I cannot live the next 6-8 years behind bars for what both you and I have come to regard as this 'modern day lynching,' only to come out of prison in my late 50s a broken, penniless and very much alone woman."


Attorney Montgomery Blair Sibley--the author of Why Just Her:  The Judicial Lynching of the D.C. Madam, Deborah Jeane Palfrey--on Jeane's unsuccessful attempt to commit suicide a week before she hanged herself:

"The date of the three [suicide] notes, April 25, 2008, [six] days before her death, was subsequently explained by [her mother,] Blanche.  On April 25th, Jeane had taken an overdose of Zolpidem while at her condominium in [Orlando], Florida.  Zolpidem is know as the over-the-counter sleep aid Ambien. . . . Blanche subsequently told me that after writing the three notes on April 25, 2008, and taking an unknown quantity of zolpiem, Jeane was unconscious for 30 hours.  Upon waking up, she drove to Blanche's mobile home in Tarpon Springs, Florida. . . .

"Though conspiracy theories quickly populated the internet, the hard evidence was simply too overwhelming to permit any conclusion other than Jeane had taken her own life."  (page 580-581)


May 6, 2008, letter from Dan Moldea to a person who wrote to him about the possibility that Jeane had been murdered:

Trust me, if there was any indication that foul play was involved, I would be all over this tragic situation.  I would be absolutely relentless.  But the handwritten suicide notes--along with everything else I know and what Jeane told me about her determination to end her own life in lieu of returning to prison--prove to me that she, indeed, took her own life.  She simply didn't want to live if she wasn't free.

Just so you know, when she first told me last summer about her plan to commit suicide if convicted, I immediately went to her attorney--who was her most loyal friend--and told him, "Hey, I think we have a problem. . . ."

So don't think for a second that I was the only person to whom she confided about her intentions.  She told a lot of people.

Further, if Jeane had known anything important, she and I would've used it in our book proposal last summer--which we could not sell because it wasn't sensational enough.  Or, more significantly, she would've used it as part of her defense during the trial.

In other words, there was no "black book"--only a bunch of phone records, which everyone in the world had access to via her website.  Everyone, including me, had the same information.  She really didn't possess any Big Secrets.

Jeane ran an escort service, a cash business, from 3,000 miles away and was in communication with clients who mostly gave her fake names.  And, while doing business, she really didn't care who they were.

When I discovered Senator David Vitter's number in her phone records last July, I called and asked her what she knew about him.  Her reply was, "Who is David Vitter?"  [Jeane later told CNN the same thing:  She didn't know who Senator Vitter was.]

Still, I support a complete and thorough investigation of Jeane's horrible death and have cooperated fully with the official police probe.

Thank you for your note.  I hope this answers some of your questions.

Moldea reveals that Jeane had earlier tried to commit suicide following her conviction:

RICK SANCHEZ:  All right, joining us now and Josh mentioned this while we're talking is one of the last people to see Palfrey alive.  Dan Moldea has been planning to write a book about the D.C. Madam.  He's good enough to join us now.

Dan, I understand that you had lunch with her just a few days before she died.  How do you find her?

DAN MOLDEA, AUTHOR:  Well, actually, I had lunch with her and a friend of mine, Jim Grady, a few days before her conviction here in Washington.  She was fine.  She was very upbeat.  She confided in Jim and I that she and her attorney had decided that they were going to claim that the prosecution had not made its case, and they were going to rest.  And she was onboard with that.  She was very upbeat and was convinced that she was going to be acquitted.

SANCHEZ:  Given that, do you think she killed herself?

MOLDEA:  There's no doubt in my mind that she committed suicide.  She told me on no fewer than three occasions that in lieu of going back to prison where she had spent 18 months back in the early 90s, she would commit suicide.  As soon as I heard that, I immediately went to her attorney, who was probably her best friend and most loyal friend.

I was not the only person she told that to.

SANCHEZ:  What do you make of all these conspiracies then?  I mean, the blogosphere is absolutely jam packed with them as I'm sure you've notice.

Let me say, first of all, that I liked Jeane.  She was a kind person.  She was very smart.  She was a funny person.  Legal or moral considerations aside, she was a good person.

With regard to the conspiracy theories, let me break a little news for you right now.

MOLDEA:  I received information from a very reliable source in this matter.  And I gave this information to the police yesterday morning--That Jeane had tried to kill herself prior to this after her conviction.  She had gone to Orlando shortly after she returned to Florida.  She had taken an intentional overdose, and it failed.  In the wake of the failure of her overdose to end her life, she went back to Tarpon Springs, and she [hanged] herself.

SANCHEZ:   Dan Moldea making news for us here, or should we say sharing it with us.  We thank you for your insight into this story.  Thanks again, Dan. 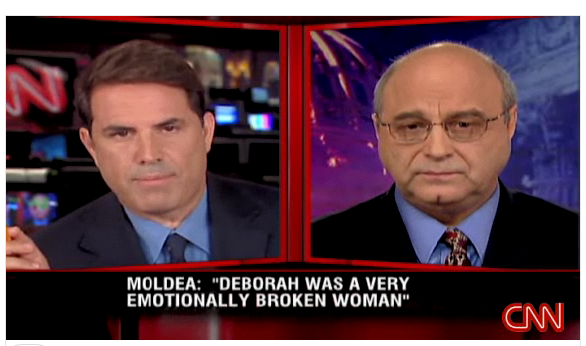