The Hunting of the President:
The Ten-Year Campaign to Destroy Bill Clinton

"The last third of the film is devoted to its most important accusation:  How this campaign from the right came to dominate the post-Watergate, post-cable TV media.  The most damning talking head may be Dan Moldea, author of several books debunking conspiracy theories of both the left and right, who calls the press coverage of the Vincent Foster case 'the most corrupt act of journalism I have ever seen.'"  (Seattle Times, July 23, 2004) 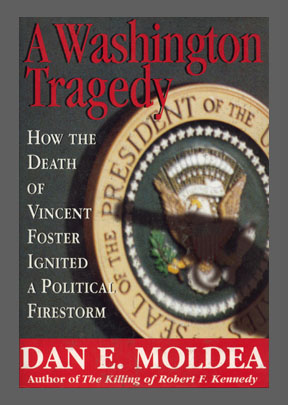 Dan E. Moldea on his role in the Clinton-impeachment drama:

Prior to the release of my 1998 book, A Washington Tragedy:  How the Death of Vincent Foster Ignited a Political Firestorm--which detailed the official and unofficial investigations of Foster's suicide, and it was a suicide--I had never published anything about President Bill Clinton or his administration, even though I had enthusiastically voted for him in 1992 and 1996.  (See: Chapter One of A Washington Tragedy, as well as the circumstances of my strange relationship with Regnery Publishing)

The Foster case was an eye-opening, life-altering experience for me.  Through my research, I had collected clear evidence that a dishonest, money-grubbing cabal of Clinton-haters--who shared information, covered up each other's mistakes, fabricated evidence, and received their funding from the same source--had tried to portray Foster's suicide as a murder in a cynical effort to undermine the authority of the Clinton White House.

It was then that I realized what the President had been up against since his first inauguration in 1993:  His political enemies were prepared to do anything--and use anything--to remove him from office.  Consequently, when the Monica Lewinsky scandal erupted in January 1998, I decided to take sides and became an uninvited bit player in the war between the President and his enemies.  Upon the release of my book in April, I publicly announced my support for the President, along with my criticism of the Office of the Independent Counsel (OIC), during radio and television appearances.

On May 19, 1998, during a speech at the Martin Luther King Library in downtown Washington, I alleged that the OIC routinely leaked non-public information on an off-the-record basis to a selected group of journalists, many of whom had become shills and stalking horses for Kenneth Starr and the OIC.  I based these charges on my on-the-record conversations with members of the OIC staff during my research for the Foster book.  Then, after the release of Steven Brill's "Pressgate" article in mid-June, evidence evolved, showing that some of these journalists had taken information from their own sources and actually fed it to the OIC, which later identified these reporters in court records as confidential informants.

Like me, these journalists had taken sides in the dispute; but, unlike me, they did not announce their biases, continuing instead to hide behind the First Amendment and to report for their news organizations under the false guise of objectivity. 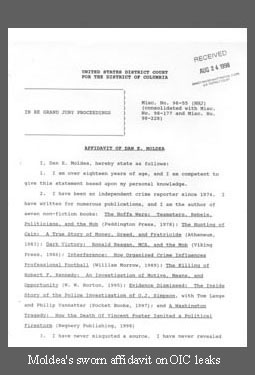 In late July, in response to what many considered a cooperative effort between OIC prosecutors and this group of Washington reporters--who now needed the President's removal from office in order to justify their abuses and excesses--I revealed that I had tape recorded my on-the-record conversations with Starr's two deputies, Hickman Ewing and Jackie Bennett, upon whom I had based my original allegations about the OIC leaks.

On August 24, 1998--a week after the President's appearance before the OIC's federal grand jury--I attached the transcripts of these two conversations to an affidavit I filed with U.S. District Judge Norma Holloway Johnson, who had already ordered that Starr and the OIC be investigated for allegedly leaking secret information, illegally, to its stable of reporters.  (See:  Affidavit on OIC Leaks, as well as Judge Johnson's list of 24 allegedly illegal leaks.)

On November 23--as the OIC leaks investigation proceeded and the President's impeachment appeared inevitable over what many considered the criminalization of his personal life--a representative of Larry Flynt approached me with an offer to head the investigation of hypocrisy among the President's critics:  Those who had one standard of behavior for the President and another standard for themselves.  Earlier, on October 4, Flynt had placed a full-page ad in the Washington Post, offering "up to a million dollars" to those who could provide proof of such hypocrisy. 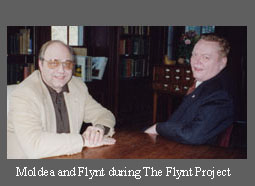 Even though I had never targeted the private life of any public figure before, I accepted the assignment and was responsible for, among other matters, the Flynt-backed investigation of U.S. House Speaker-designate Bob Livingston (R-Louisiana), who announced his resignation from Congress on December 19, the same day as the impeachment of the President.  I also handled the probe of Representative Bob Barr (R-Georgia), the only other political figure Flynt chose to expose.  (See:  The Flynt Project:  Exposing Hypocrisy; Exhibiting Restraint)

I voluntarily left the Flynt operation on January 22, 1999, in the midst of the Senate trial--after Senator Robert Byrd (D-West Virginia) announced earlier in the day that he planned to propose a resolution to dismiss all charges against the President.  I assumed then that the President would be acquitted, which he was on February 12.

The shock waves of the Livingston resignation spread far beyond the West Wing of the White House, and had a sobering effect on members of Congress of both parties who might have been contemplating calling for Mr. Clinton to step down in the aftermath of the impeachment vote.

Defending my actions nine years later, I told the Washington Post in a story published on August 8, 2007:  "There was a right-wing attempt to overthrow the executive branch of government, and I thought I could be sacrificed. . . . This was important enough for me to risk being destroyed."

Other authors on Moldea's role

* In Joe Conason and Gene Lyons's bestselling book, The Hunting of the President (St. Martin's, 2000), the authors wrote:

Apart from the Fiske and Starr Reports, the most accurate, comprehensive account of the Foster suicide and its aftermath is A Washington Tragedy:  How the Death of Vincent Foster Ignited a Political Firestorm, by Dan E. Moldea.

* In his bestselling book, And the Horse He Rode In On (Simon & Schuster, 1998), Clinton defender James Carville, speaking of the OIC leaks investigation, stated:

One journalist finally had the temerity to step forward and explain how all this sensitive information had been coming out into the light of day.  Dan Moldea, a respected crime reporter with more than seven exhaustively investigated books under his belt, heard one of Starr’s emphatic denials and was so disgusted that he told his tale.

* In his bestselling book, American Rhapsody (Knopf, 2000), author Joe Eszterhas published a chapter, "Larry Flynt Saves the Day," in which he declared:

* In his widely-respected business book, Damage Control: Why Everything You Know About Crisis Management Is Wrong (Portfolio, 2007), author Eric Dezenhall wrote:

The Republicans' worst nightmare came when Flynt retained investigative reporter Dan E. Moldea, who had been standing up to Mafia kingpins, assassins, and corrupt union bosses for decades.  Moldea, who made no bones about sympathizing with President Clinton's struggle, proceeded to systematically expose the sex lives of Republican congressional leaders on the grounds that they were not qualified to judge Clinton's morality.  Regardless of where one stands on the political spectrum and the techniques employed on both sides of the Clinton wars, one thing soon became clear:  The strategy worked.