The Corruption of Ronald Reagan 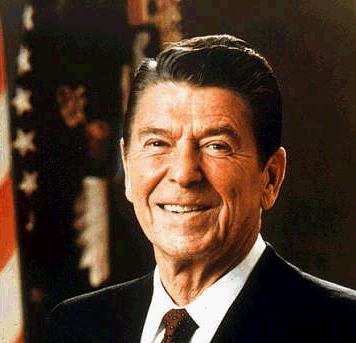 President Bill Clintons enemies love to make much of his Hollywood connections, as well as his testimony before a federal grand jury and an odd land deal in which he and his wife lost money.

Yet, they refuse to compare the Clinton record with the case history of Ronald Reagan, whom most Clinton-haters continue to worship and attempt to canonize.

Once again, the Presidents harsh critics continue to demonstrate that they have two conflicting standards for public officials: one for those they like and another for those they dont like.

For instance, consider the following:

Ronald Reagan was an invention of the Hollywood conglomerate, MCA, which was founded in 1924 by Jules Stein, a Chicago ophthalmologist who quickly became friendly with the local underworld. Every facet of Reagans life, from his careers in acting and politics to his financial successes, were directed by MCA, which, with the help of the Mafia, was the most powerful force in Hollywood from the mid-1940s until the Bronfman family purchased the company in 1995.

Reagan came to Los Angeles in 1937 to make motion pictures, and, in 1940, MCA bought out his talent agency.  Lew Wasserman became Reagan's personal agent; he negotiated a million-dollar contract with Warner Brothers on Reagan's behalf.  In 1946, Wasserman became the president of MCA, and the following year, Reagan, with his film career already in decline, became the president of the Screen Actors Guild.  By his own admission, Reagan immediately aligned himself with the corrupt Teamsters and other mob-connected unions in an effort to combat Hollywood Reds.

A sweetheart relationship developed between MCA and the guild, which culminated in July 1952 during Reagan's fifth consecutive term as SAG's president.  Reagan and Laurence Beilenson, an attorney for MCA who had previously served as SAG's general counsel and had represented Reagan in his 1949 divorce from Jane Wyman, negotiated an exclusive blanket waiver with SAG that permitted MCA to engage in unlimited film production.  The agreement violated SAG's bylaws, which prohibited talent agencies from employing their own clients, and no other talent agency was granted a similar agreement at that time.  A Justice Department memorandum indicated that the waiver became "the central fact of MCA's whole rise to power."

At the end of Reagan's fifth term, he began to have serious financial problems, particularly with the IRS.  In response, MCA negotiated a deal with the Last Frontier Hotel in Las Vegas--which was then operated by Chicago mobsters--for Reagan to host a song-and-dance show for two weeks and to receive enough money to cover his back tax debt.  When Reagan returned to Hollywood, MCA, through its newly formed Revue Productions, hired him to host its flagship television program, The General Electric Theater for $125,000 a year.  He was paid additional fees when he produced episodes for the series.

Despite his status as a television producer, Reagan remained on SAG's board in another violation of the guild's bylaws, which prohibited producers from holding office in SAG.  In 1959, when Reagan ran for an unprecedented sixth term as SAG's president, his opponents raised the bylaws issue.  Publicly, Reagan denied that he had ever produced The General Electric Theater--a flat-out lie.

Wasserman had encouraged Reagan to run again.  MCA was facing sensitive negotiations with SAG over residual motion picture rights for actors.  The issue eventually forced SAG to strike in 1960, and Reagan became the actors' chief negotiator.  Labor attorney Sidney Korshak aided Reagan and the studios in the final settlement.  Years later, The New York Times characterized Korshak as the link between the legitimate business world and organized crime.

The contract that Reagan and company arranged with the studios is still known in Hollywood as "The Great Giveaway"; it provided residuals for actors only from films made after 1960.  This greatly benefited MCA, which had purchased the film library of Paramount Pictures in 1959.  Now, MCA could keep all the profits.

In 1962, the Justice Department filed a federal antitrust suit against MCA on the basis that it was both a talent agency and a production company; SAG was charged as a coconspirator.

Reagan was the subject of criminal and civil investigations by both the FBI and a federal grand jury in Los Angeles.  A Justice Department memorandum quoted a Hollywood source as saying, "Ronald Reagan is a complete slave of MCA who would do their bidding on anything."

Reagan was subpoenaed before the grand jury, but he appeared to experience amnesia during his testimony on February 5, 1962, and failed to recall the major decisions that had been made when SAG had granted MCA the exclusive blanket waiver in 1952.  Federal prosecutors were so convinced that Reagan had perjured himself repeatedly during his testimony that they subpoenaed his and his wife's income tax returns for the years 1952 to 1955.  Nancy Reagan had been a member of SAG's board of directors since 1951.

The entire transcript of this testimony is contained in my 1986 book, Dark Victory: Ronald Reagan, MCA, and the Mob (Viking Press, pp. 167-201), which is now out of print.  (Previously, the most influential book about Reagan--which contained only one brief cite in the index to MCA and no mention of Jules Stein--had been written by Washington Post reporter Lou Cannon, whose 1982 book, Reagan, had been published by Putnam, a subsidiary of MCA.)

However, in July 1962--in the wake of MCA's purchase of Decca Records, the parent company of Universal Pictures--MCA agreed to abolish its talent agency.  As a result, all charges against and investigations of the company and its alleged coconspirators were dropped and the record of the case was sealed.

Deeply affected by the breakup of MCA, Reagan, a lifelong Democrat, became an anti-big government Republican.  He had been urged to do so by his own political mentor, Taft Schreiber, a longtime MCA vice president, and by MCA's founder, Jules Stein, both of whom were active in Republican politics.

On December 13, 1966, the month after Reagan was elected governor of California, Schreiber and Stein, along with Reagan's personal attorney, William French Smith (who later became Reagans attorney general), sold 236 of Reagan's 290 acres in Malibu Canyon to Twentieth Century-Fox.  The purchase price was $1.93 million, or $8,178 an acreeven though Fox's experts had appraised the land at only $944,000, or $4,000 an acre.

In July 1968, Reagan used the remaining 54 acres in Malibu Canyon (which were appraised at $165,000) as a down payment on a $346,950 property in Riverside, California, that he was buying from Kaiser Aluminum Company.  However, there was a proviso in the contract that said that if Kaiser couldn't sell the 54 acres within a year, Reagan would have to buy them back.

By July 1969, Kaiser hadn't sold the land.  To bail Governor Reagan out, Stein set up the 57th Madison Corporation, which was chartered in Delaware, and personally purchased the property for $165,000.

Stein died in 1981, soon after Reagans inauguration as President of the United States.

As President, Reagan watched as his Justice Department quashed major federal investigations of the Mafias penetration of both MCA and the entire motion picture industry, which were being conducted by the Los Angeles office of the U.S. Strike Force Against Organized Crime.  Two highly respected Strike Force prosecutors, Marvin Rudnick and Richard Stavin, lost their jobs because of their refusal to succumb to pressure from the Reagan Administration.

Where were the future high-minded critics of Bill Clinton back then?  And what are they doing now?